France is one of the hottest tourist destinations in Europe and with good reason. The capital city of Paris is one of the most famous cities in the world, and the country boasts of magnificent and diverse architecture, history and of course, food. You may know where you’re going to go and what you’re going to see, but there’s a lot more to visiting a foreign country than may be anticipated. Here’s a practical guide to visiting France.

Especially if you’re going to France for the first time, Paris is probably the start of your trip. This unique city has a lot going on, so here’s a breakdown of practical things to know:

Public Transit: Public transit in Paris is amazing, especially as someone coming from the USA. With a Paris Visite travel pass, you’re able to visit the entire city and even its suburbs for a low price. And yes, the pass actually does provide unlimited travel within the dates specified.

For your reference, zone 1 is Paris city. Versailles is in zone 4, Disneyland and CDG airport are in zone 5. There are a tonne of different places to visit within zones 2-5 if you have more time in Paris.
You can take buses and the metro within the city and its immediate suburbs. The travel pass also allows for transport on regional trains in your specified zones, and the RER – which is another train system that goes around Paris and its suburbs.
NOTE: I’m mentioning the RER because it is an effective way to get around, but it’s also known for having thieves and, in my friends’ experience, flashers. Be alert when using this service.

CDG to Paris: You can purchase one of the aforementioned travel passes at CDG, which will allow you to take the RER or the Roissy Bus from CDG to Paris city centre. If you skip on the travel pass, it will cost about 10 or 12€ per person by taking the bus or RER. The RER and bus run frequently so definitely hitch a ride on one of those rather than spending on a taxi.

When you get to the city, use the metro to get to the stop closest to your hotel. It’s very easy to use and much cheaper than hiring a taxi.

Beware of Scams and Stealing: This is not limited to Paris but is very common. Make sure to keep an eye on your valuables at all times and don’t fall for anyone trying to put a bracelet or a ring on you.

France tends to be very uniform across all regions when it comes to culture, which makes travelling all the easier. Here are some general tips and tricks to know before seeing this beautiful country.

Language: Especially in touristy areas, many people speak English. Believe it or not, I’ve met more than 5 people who moved to France to learn English – isn’t that crazy? Some people are scared of the language barrier but even if you encounter someone who can’t speak English, you’ll find that it’s still relatively easy to work with each other to get your messages across.

Food: Gastronomy is a huge part of French culture. Restaurants are where you sit down to have a meal, which usually takes a few hours as is part of French culture. You’re expected to get several plates such as an appetizer, a main course and a dessert, and you’re expected to eat all of it. A menu is called a “carte” in French because a “menu” in French is a fixed-price dining experience. You’ll see several restaurants have a “menu.” Cafés are more relaxed settings where you can get one dish (which can be small) or just a drink. People usually still stay for a few hours. Just a few tips:
1.) The French are serious about their culinary arts so you may be refused service if you go to a restaurant and don’t order enough, or try to change your meal to your liking (e.g. asking for ketchup on your steak, butter on your fish, etc.). Please be respectful of this culture. For smaller meals, go to a café.
2.) If you’re like me and have a small stomach, look for places that do carryout (“à emporter”) and eat back at your accommodation. It’s rude to get a to-go box so this will avoid that problem, and you can even split a large meal over an entire day.
3.) France is not very vegetarian-friendly. I have a guide on maintaining a vegetarian diet abroad that will come in handy when visiting France.

Tipping: Tipping is not mandatory in France but people sometimes leave 1€ or 2 for good service.

Opening Hours: Several businesses close in the afternoon, especially restaurants, so be sure to plan your mealtimes carefully. Many places are also closed on Sunday and some are closed on Wednesday.

Currency: France uses the Euro and cash is the preferred method of payment. A lot of places do take credit cards with a minimum but they may also have an upcharge for cards. Cash is preferred and even more, exact change is preferred. For example, some places will not take a 20€ note for 10€ worth of purchase. Also beware that many French businesses do not take American Express.

Getting Around: Again, France has a fantastic public transit system. I usually use Omio and Flixbus to book my travel. Things to be aware of:
1.) You can also book trains at the station but note that the kiosks only take cards with the chip.
2.) Read the conditions of tickets because some tickets must be purchased with a French banking card only – no foreign cards.
3.) There are several transportation strikes, called Strike SNCF, to take into account when booking.

Being Female: Unfortunately, France is a first-world country that has equal opportunities for women but some of the worst cat-calling and stalking I’ve ever experienced, and I’m not alone. In Lyon, I got catcalled 7 times an hour (yes, there was a point where I’d count). Exercise caution when out in public, especially when alone, and be prepared for some unwelcome remarks.

History: The history of France and its places is rich and fascinating. Too many people visit France without knowing much about what’s gone on there, and it’s a shame because much of what happened in the past has made an imprint on the present. Definitely take the time to research the places you’re visiting because it’ll make your experience so much more fulfilling.

There’s a lot of information and tips on visiting France, so I hope I’ve been able to consolidate that info successfully and have helped you prepare for your trip. Bon voyage! 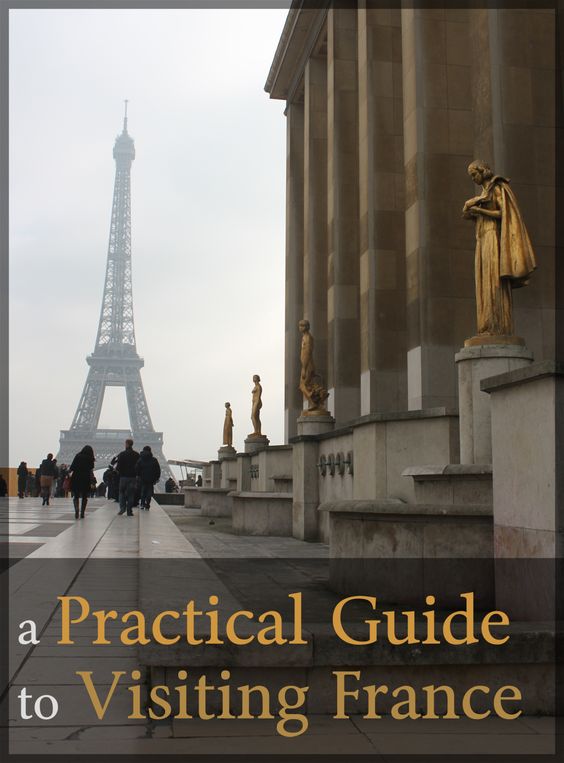