Andalusia’s history revolves around its many kingdoms and the changes that occurred over time. The Nasrid Kingdom was an Islamic one and was the last Muslim state in western Europe. In 1238, the Sultan made Granada the seat of the court. He chose to build on top of a hill, which as you can see today is very grand and also quite beautiful. The Alhambra (meaning “the red” in Arabic) was intended to be a fortress and was built to be much like a palatine city. Of course the palaces were built to house royalty but also had amenities for the others who lived on the property. The Nasrid Empire fell in 1492 and the Catholic Monarchs made construction changes to the great structure already there to make it more Christian. However we can see today that its Muslim origins are much more prominent.

The Alhambra was neglected until the mid-1800s, when it became a popular tourist site as it still is today. 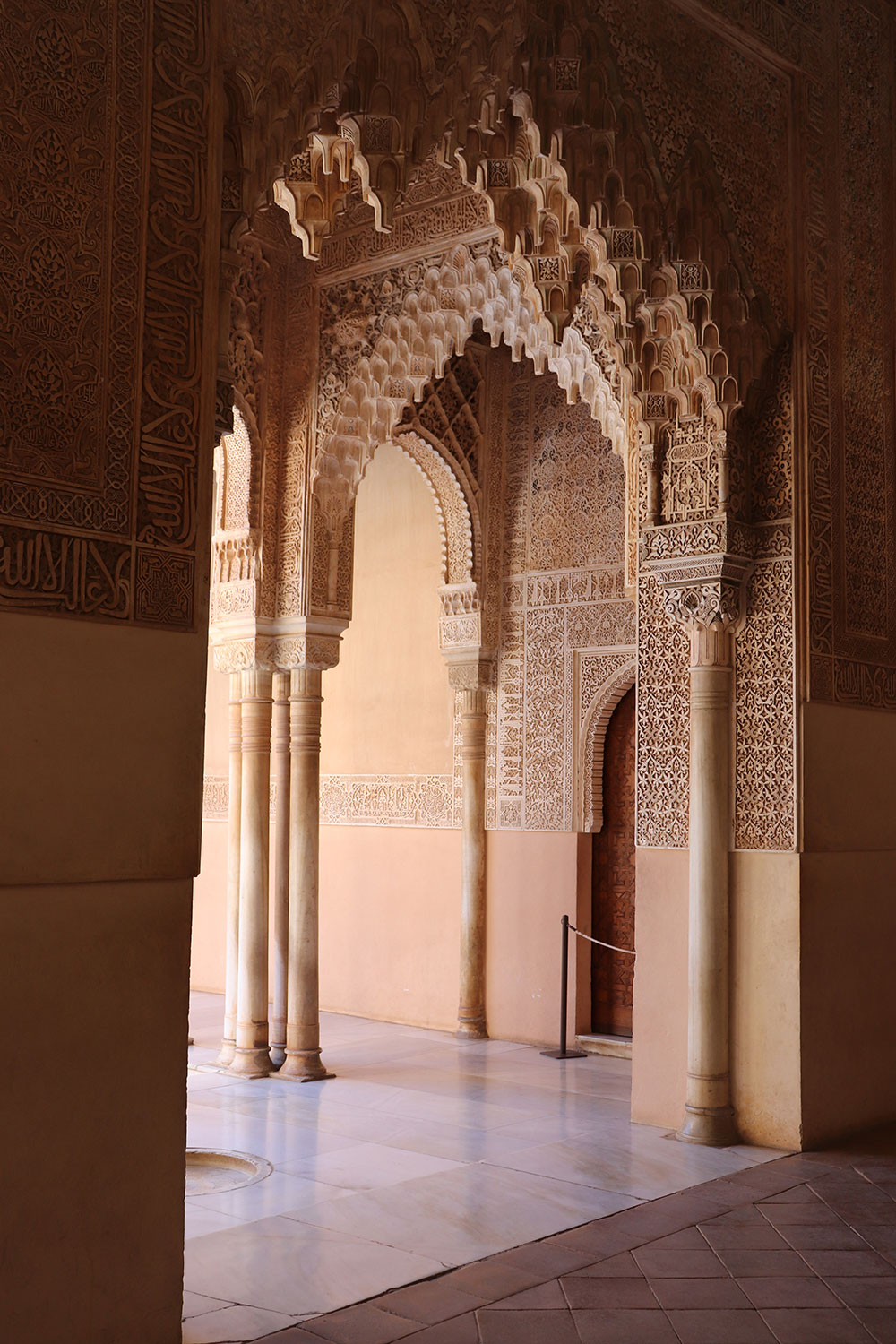 The Nasrid Palace is absolutely gorgeous, and I cannot stress that enough! Though it feels like one big palace, the Nasrid Palaces actually consist of the Mexuar, Comares and Palace of the Lions. You start your tour off in the Mexuar. This was built in the early 1300s for administrative use, but its beauty sets the tone for what you’ll see during the rest of your visit. Since it’s one of the shortest areas in the palaces, without such high ceilings, you can see much more detail along the ceiling and the top of the walls. Absolutely gorgeous. 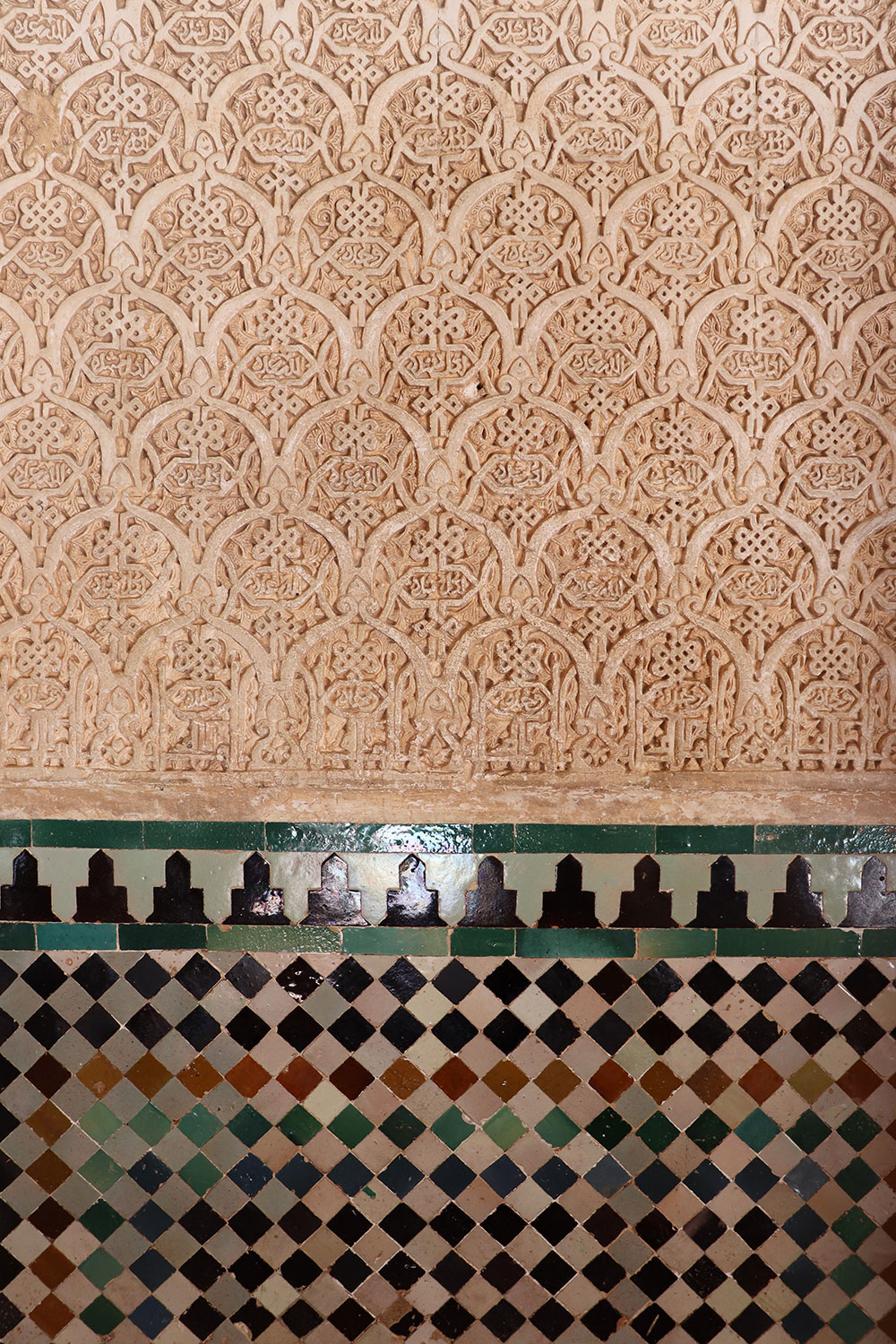 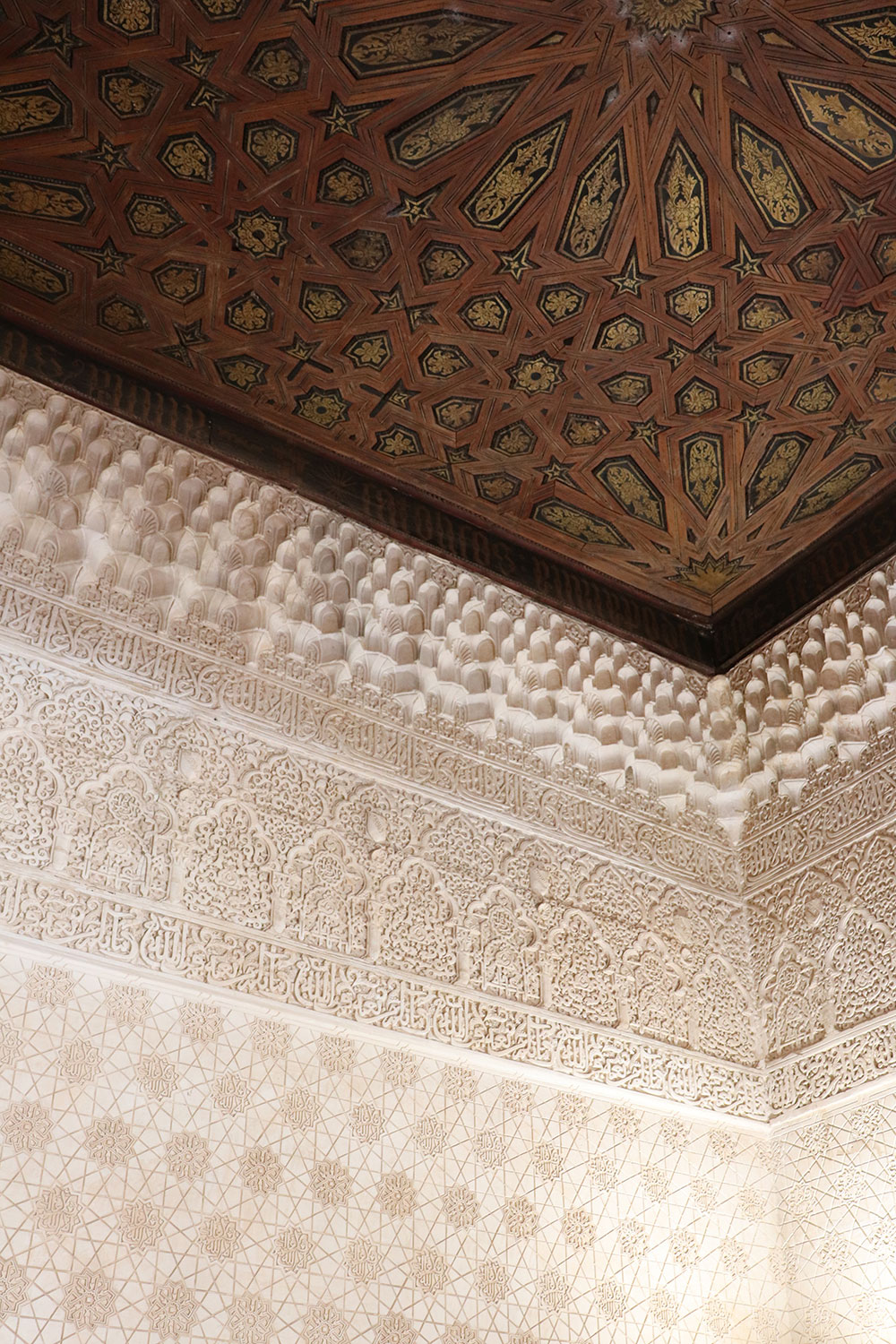 The Comares Palace came a few decades later and was intended to separate the public and private spaces. The most recognisable space is the Court of the Myrtles, which wraps around a large pool of water. However, the most divine space in my opinion is the Throne Room. It’s large and though quite dark, there is an incredible amount of detail in this space. It’s exemplary of why the Alhambra is so well visited. It also has a unique roof/ceiling made of intricately carved wood (I think). 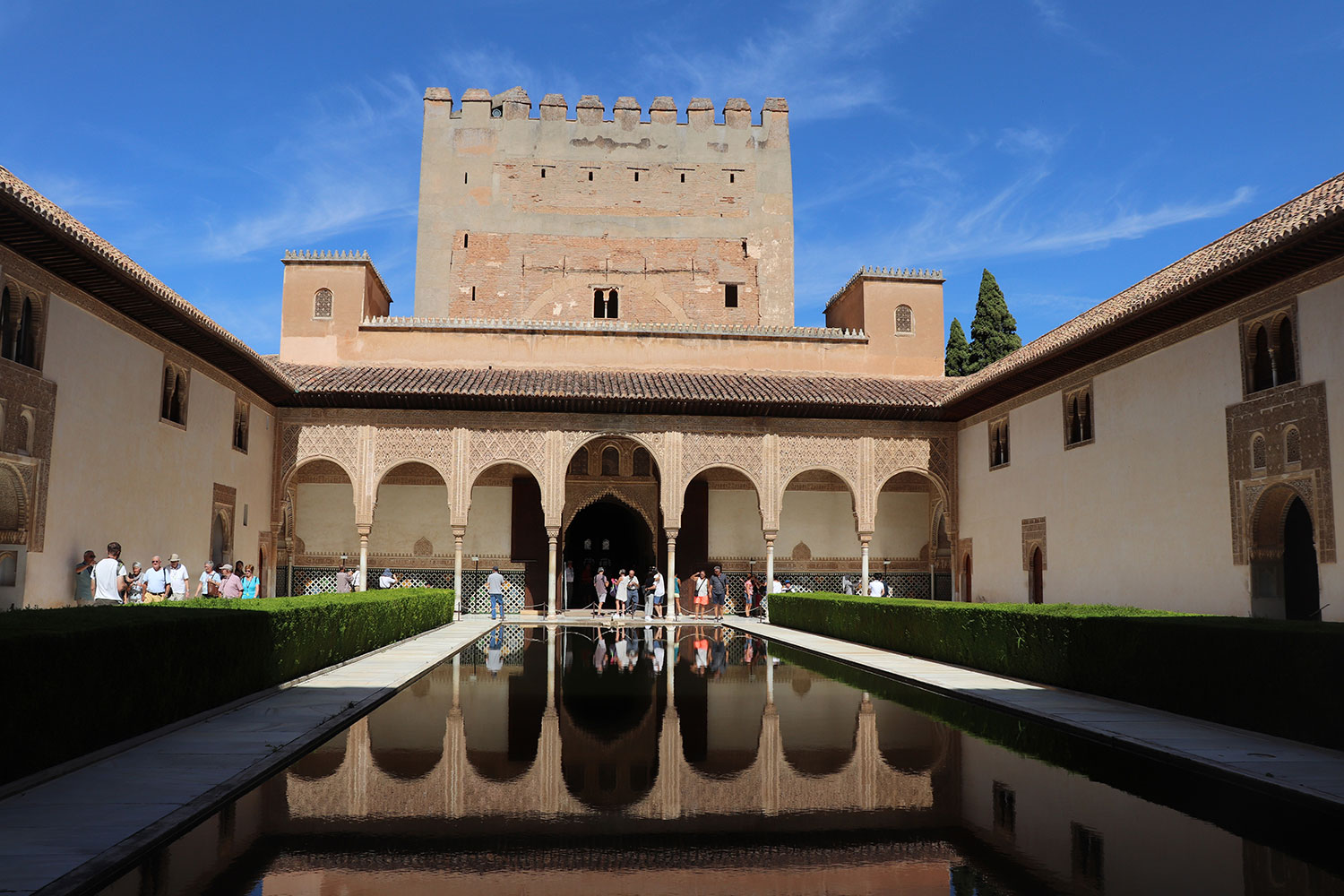 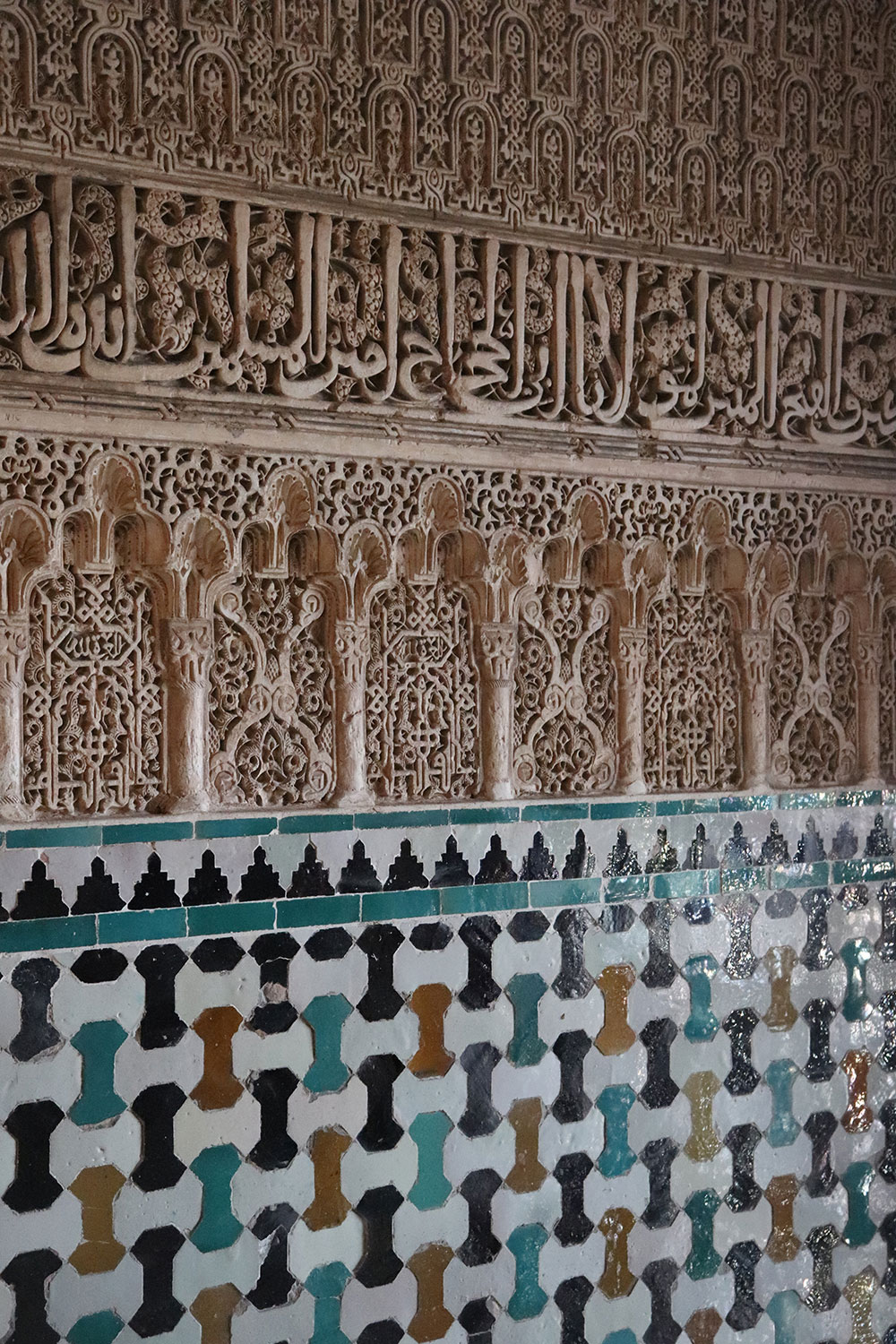 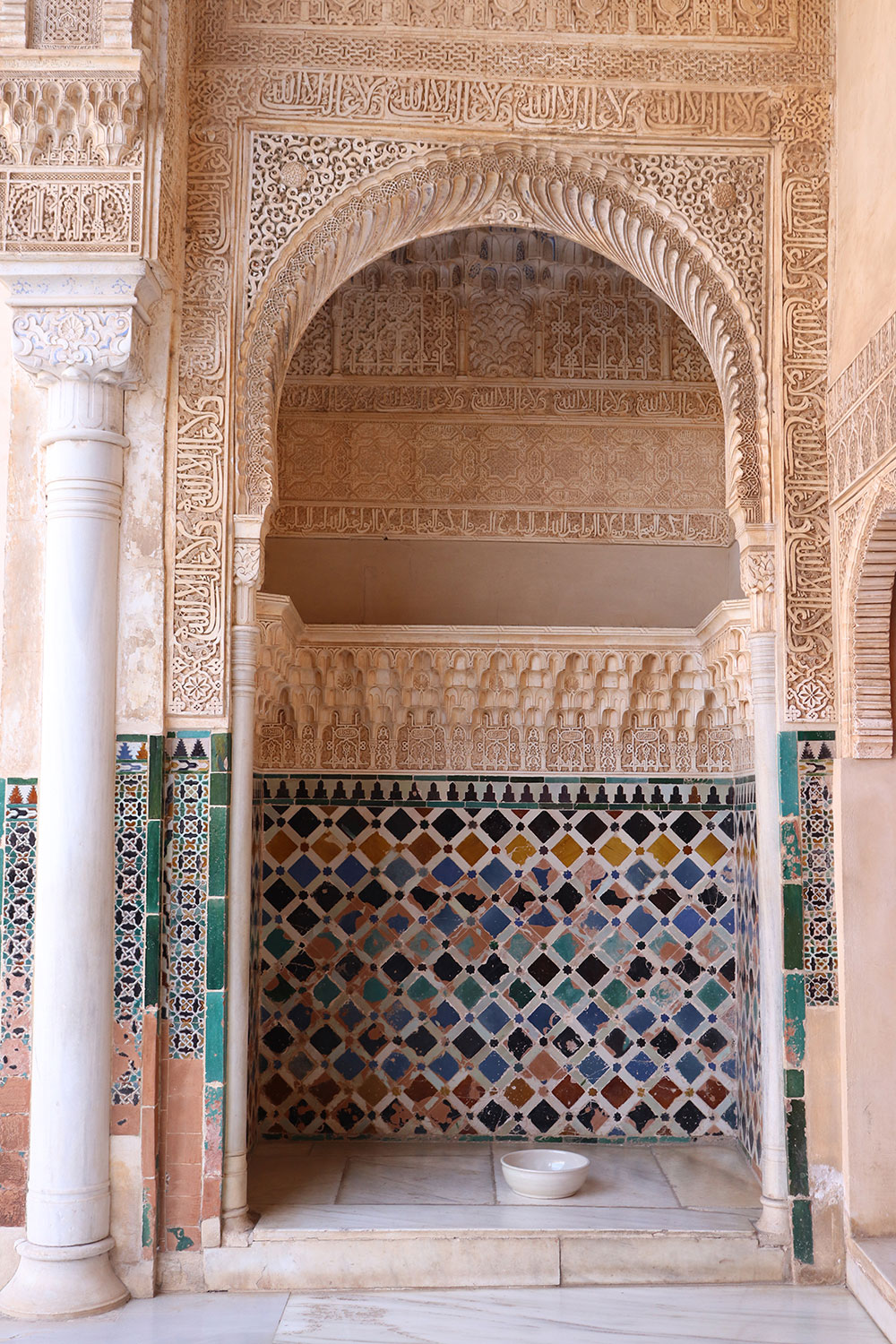 The Palace of the Lions is the most iconic interior (exterior?) of the Alhambra. The courtyard has porticos that are festooned with divine carving. The centre is the namesake, a fountain with lion statues. Each of the 12 lions is actually different in some way. Water flows in four directions from the centre, which is symbolic of the four rivers of Muslim paradise. Of course, getting water to the top of a hill/mountain was a great feat in history, so this space would’ve been even more impressive centuries ago. There are a few rooms off of the courtyard, all very well preserved and carved. My favourite feature is the muqarnas ceilings, which is also described as “honeycomb.” 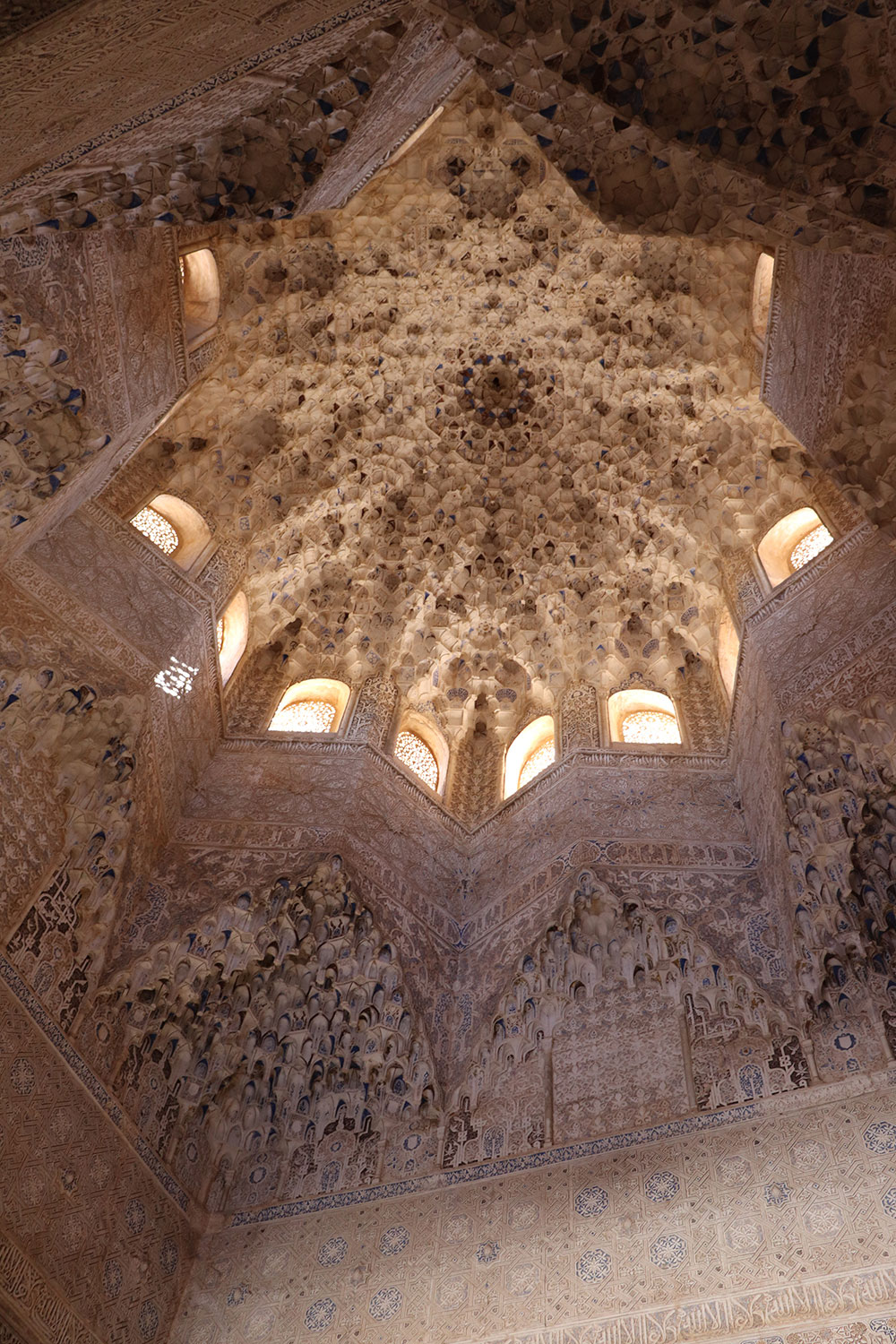 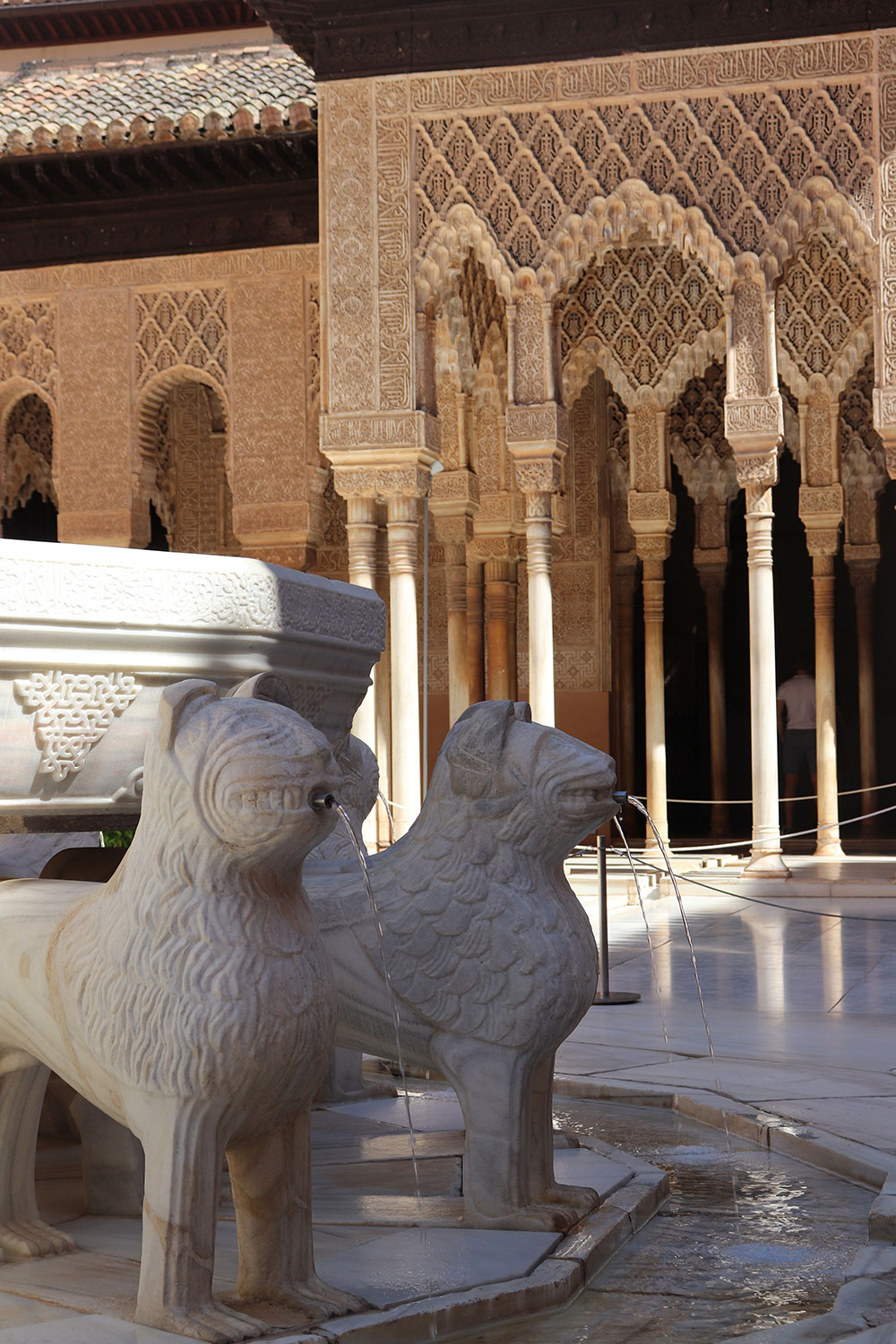 One of my favourite spots in the palace was the Hall of the Kings, which is another highly festooned area that actually has a few Christian paintings in the alcoves. It’s one of the only times you remember that this place was once converted to a Christian space. I also really liked the Hall of the Two Sisters. It too is exquisitely decorated. This is where you’ll start your exit. 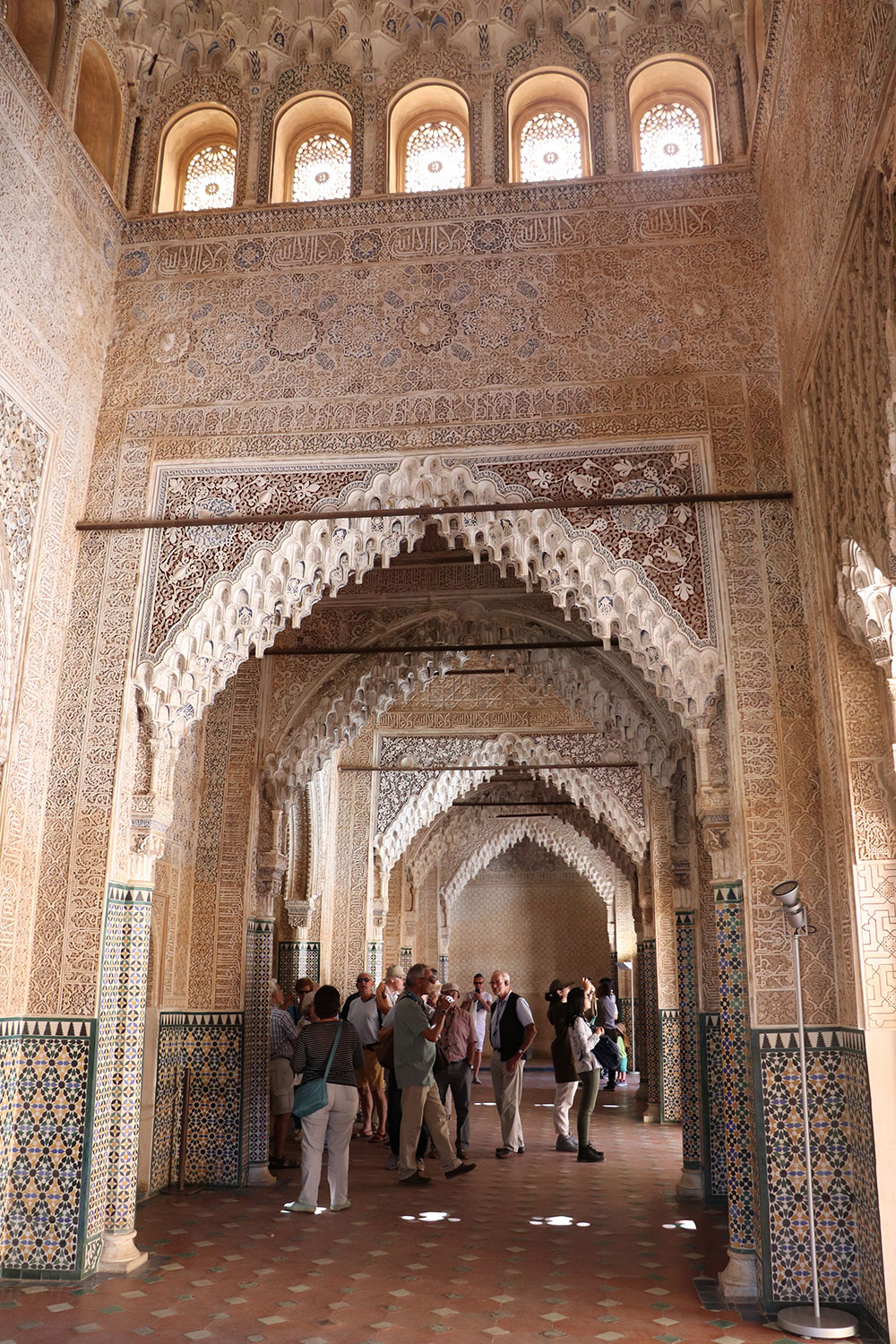 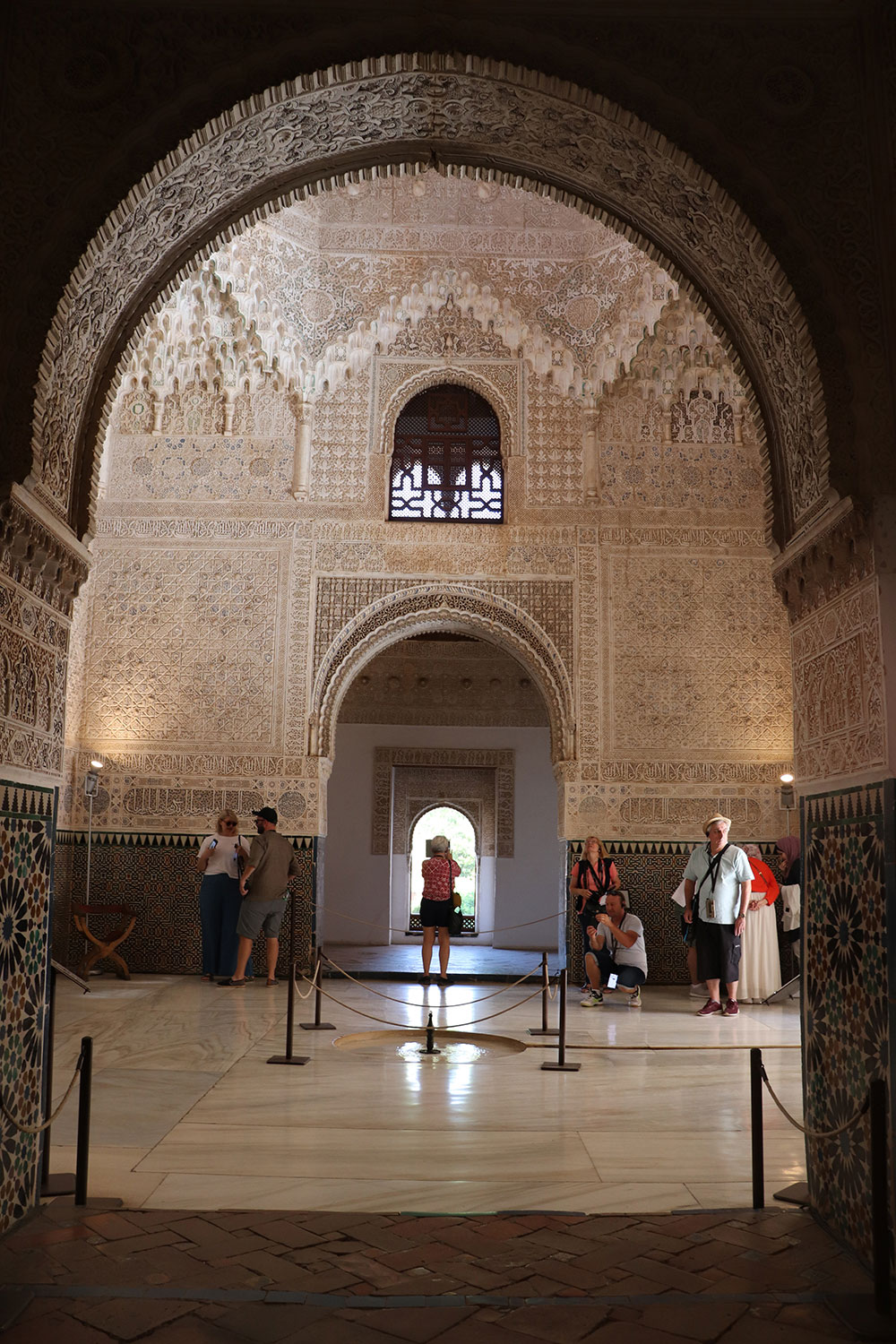 Towards the end of your tour, you can walk through the Christian rooms. Some were closed off when I was there. Though their history is still fascinating, these rooms aren’t much compared to the others. You can also see the baths before exiting to the beautiful gardens. I recommend spending some time here as well. 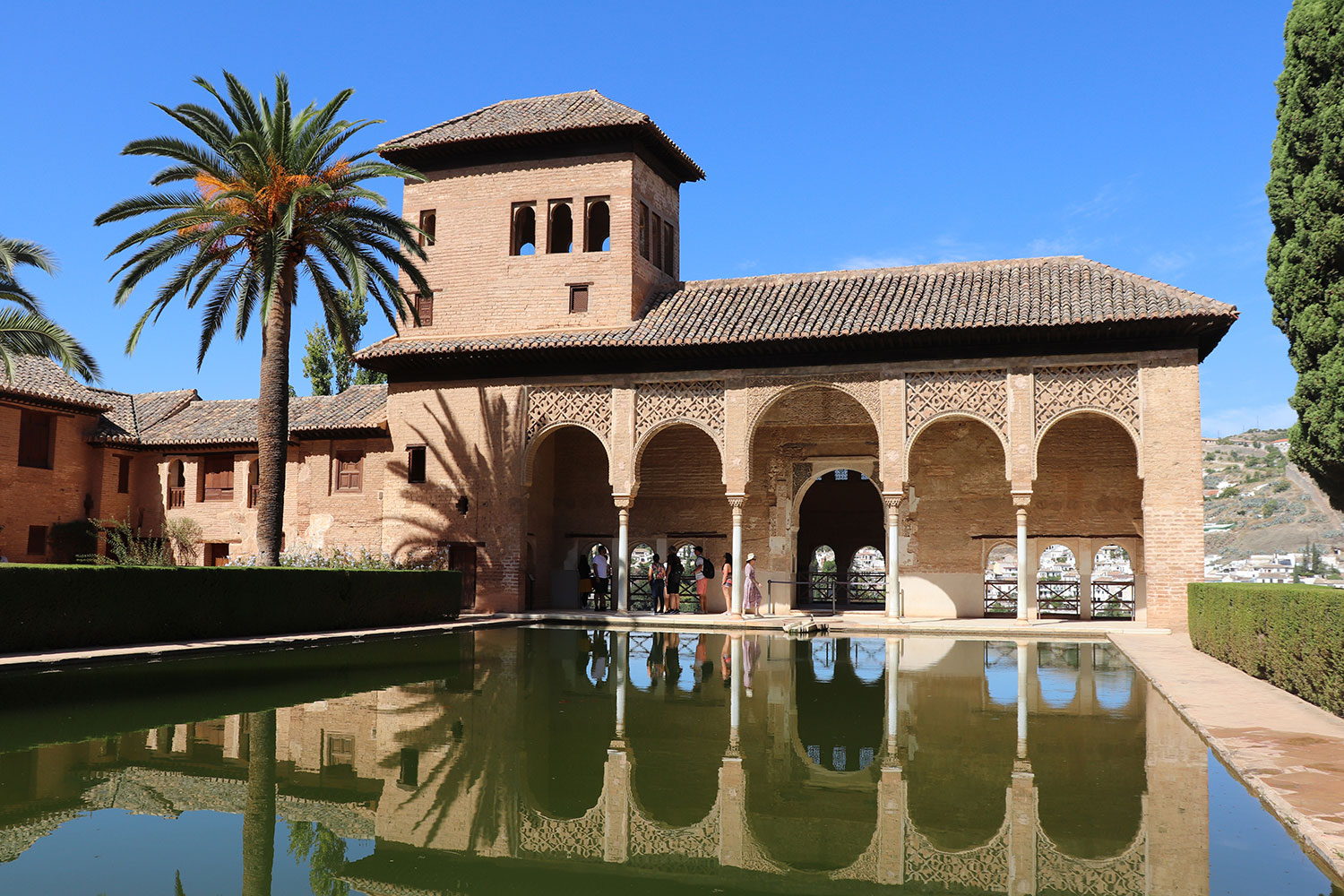 Without a ticket, you can explore the Charles V Palace. It’s a very grand square and circular palace that was erected in 1527, and it was actually intended to be a symbol of religious unity as King Charles V decided to not tear down the spectacular work the Muslims created. It’s a very Italian-style building, as it was built by an Italian. You can only go inside a small portion of the Palace to see some artefacts in a small museum. 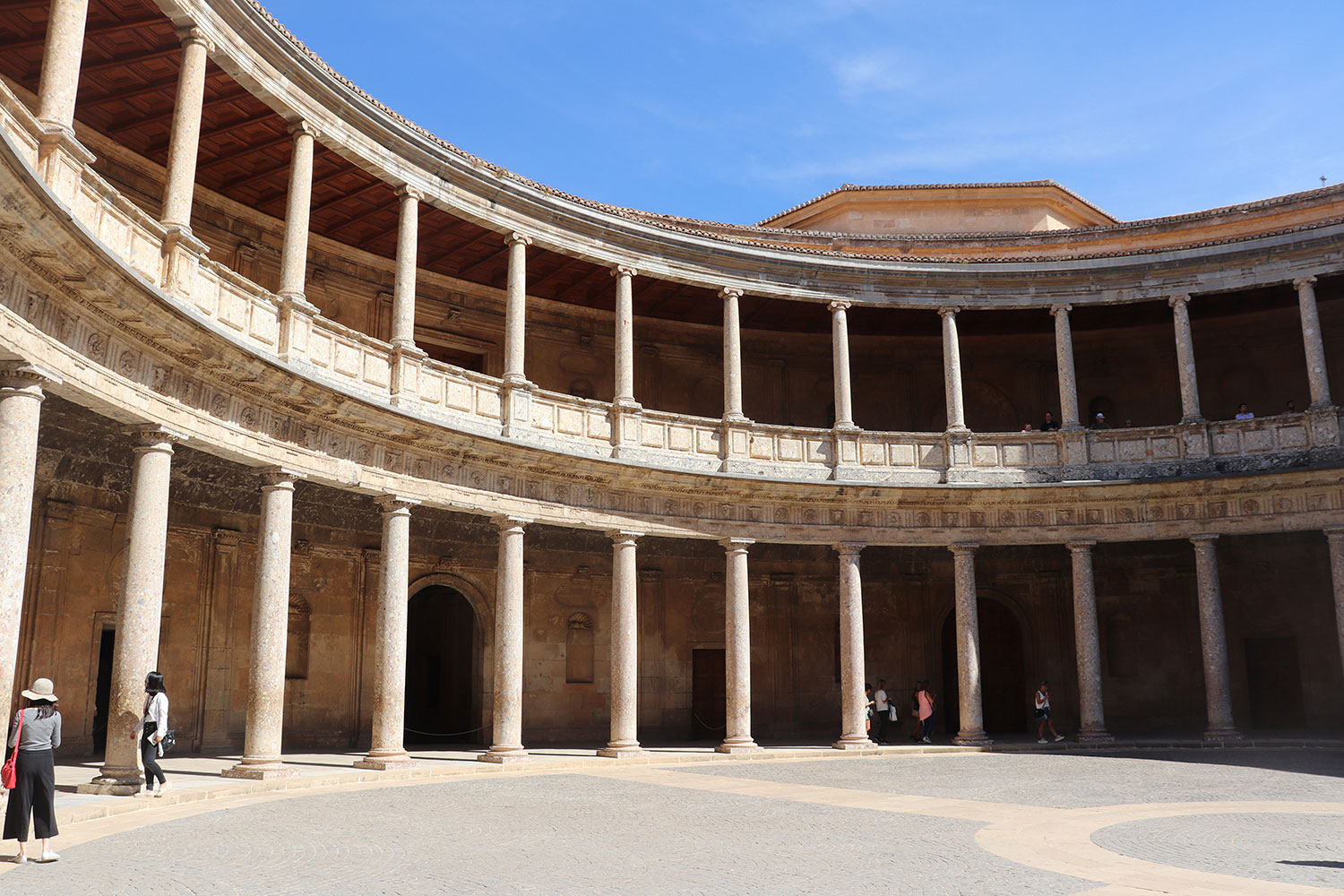 Your ticket also includes entrance to the Alcazaba, which is the ruins of the fortress and palatine city. You can clearly see how the centre was laid out, but it is a ruin so it’s slightly less exciting than the palace. There’s also the Generalife, which you’ll actually have to access outside of the Alhambra grounds. Admission is included in your ticket. 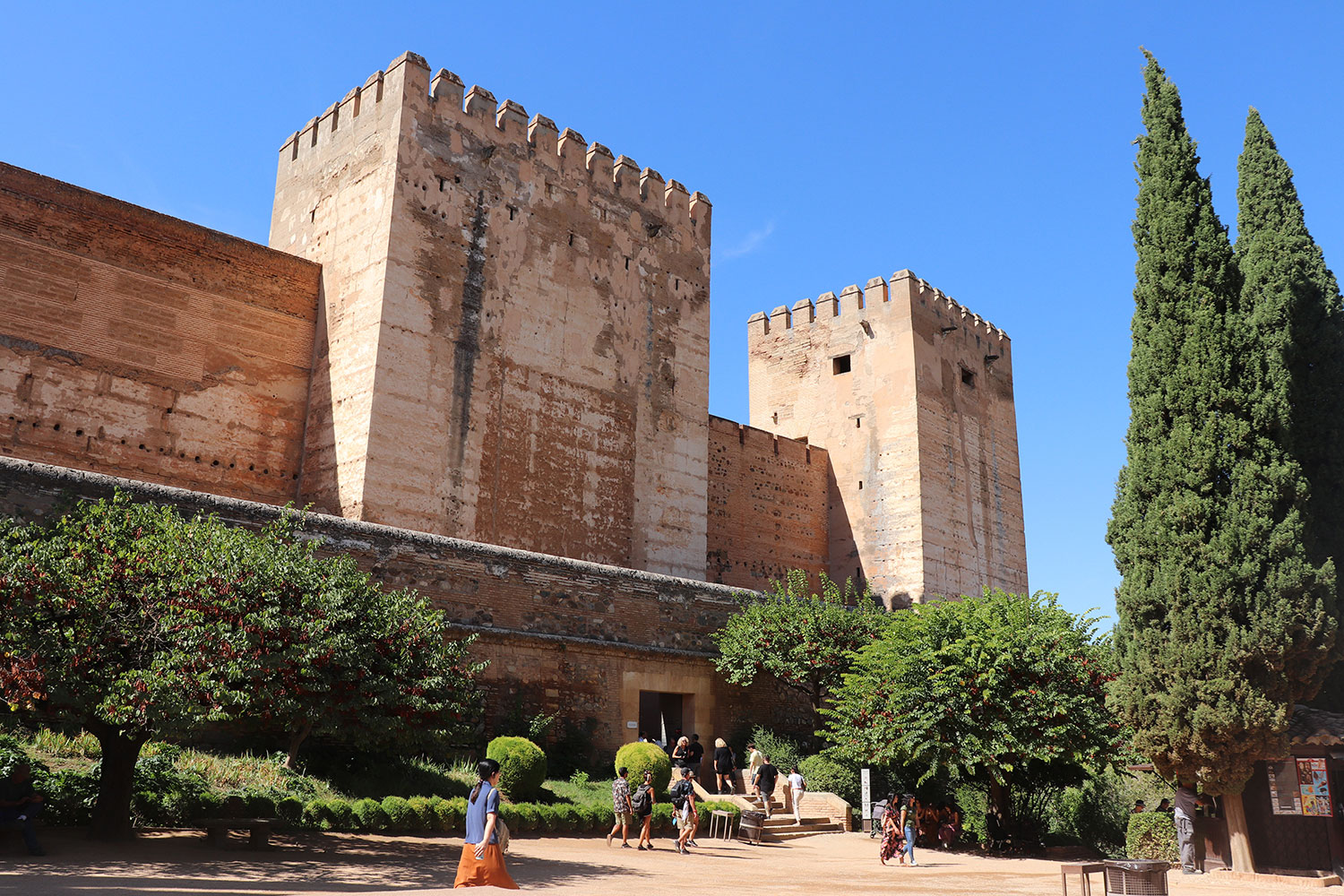 You will need to buy tickets months in advance so please purchase them as soon as you can!

Also, let me warn you that this is a very very steep climb. I walk a lot and am pretty healthy but it was difficult for me. I’d recommend taking the shuttle or bus up. There are a few places around town where you can catch them.

The city of Granada is also beautiful and has a lot to do. It deserves more time than I gave it. If you’re a slow traveller or are looking to get to know the city, you’ll need a full day in Granada alone without the Alhambra. 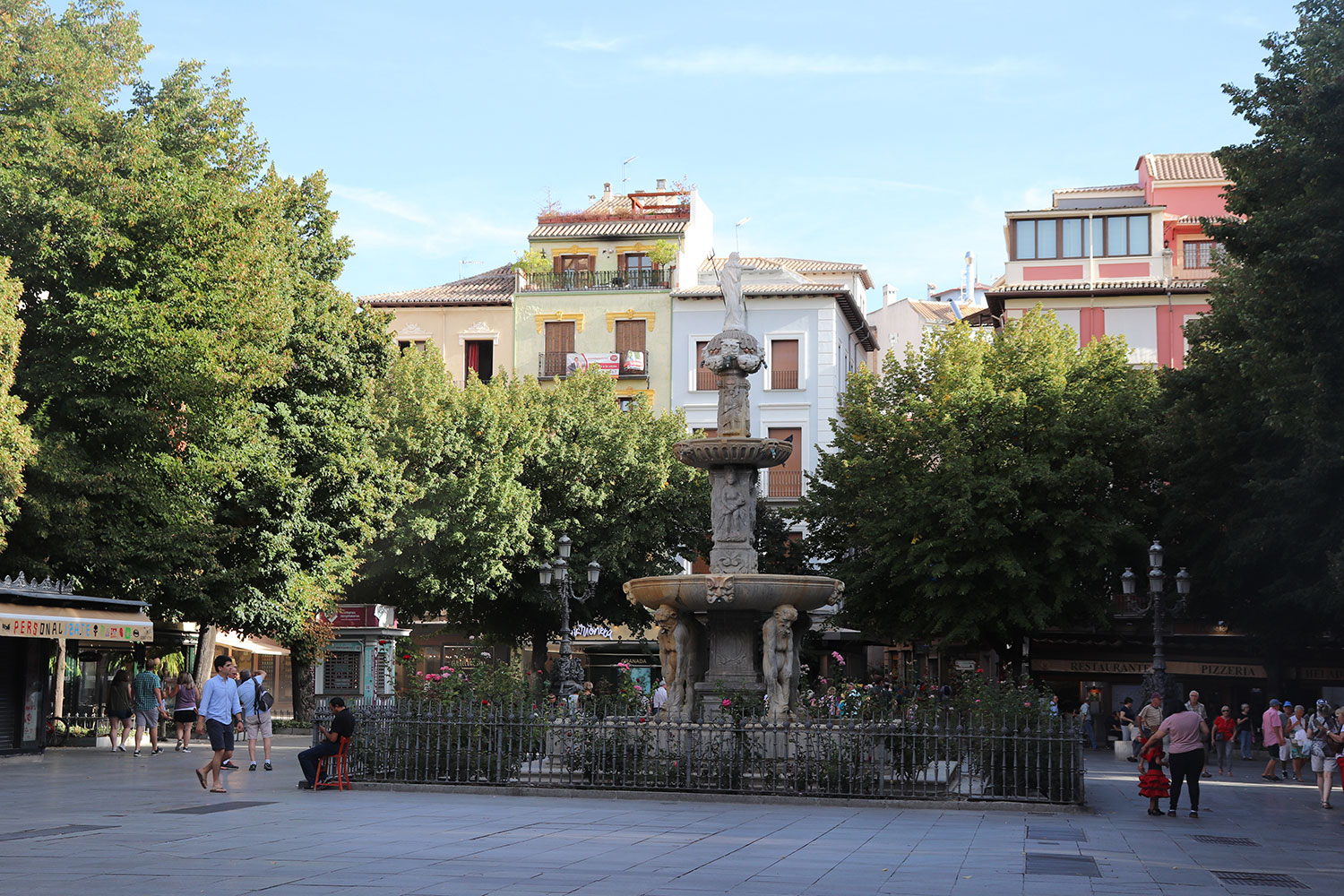 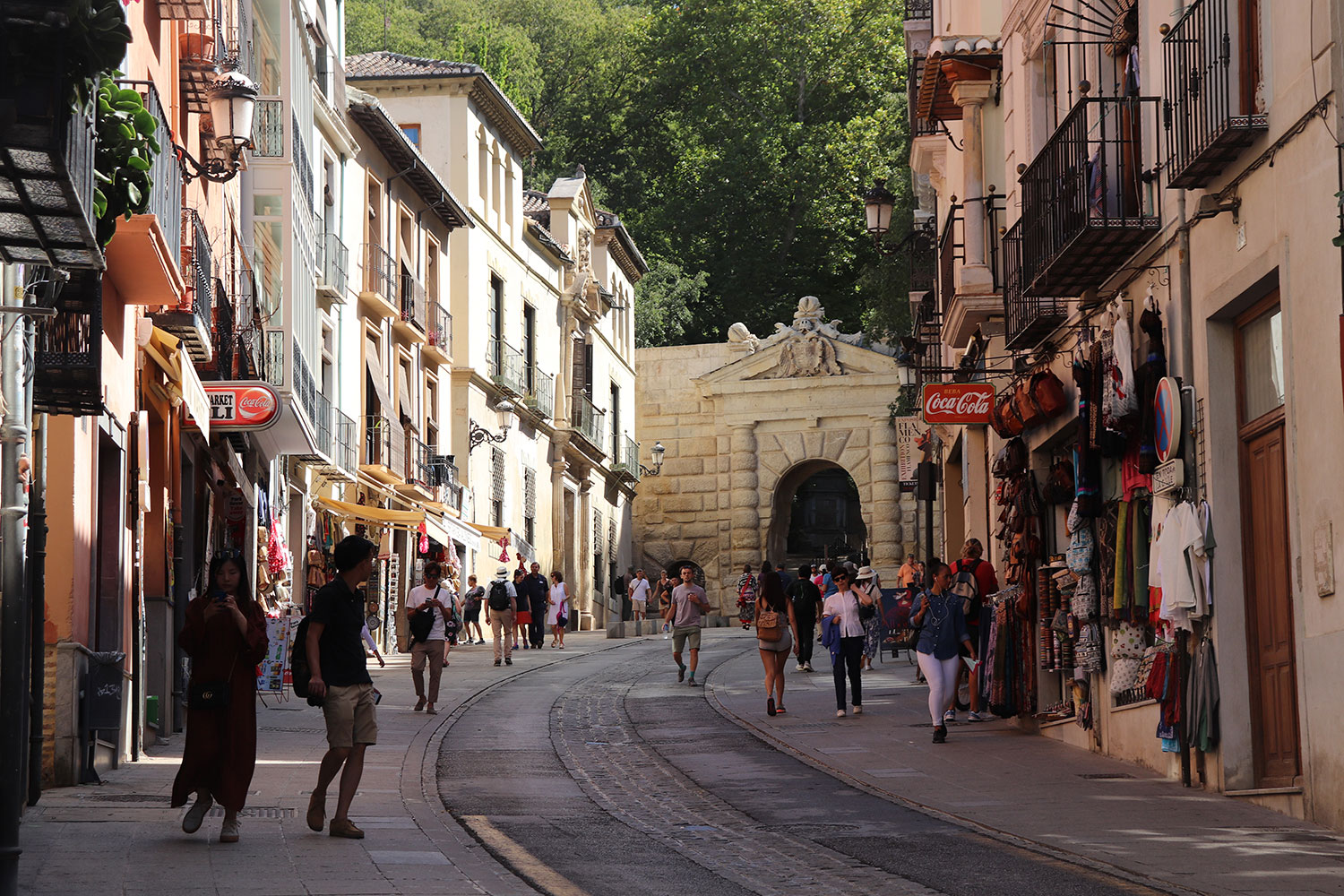 Granada has been a fortified site since the 800s, only a few centuries before the Alhambra was built. Much of its history revolves around the Alhambra.

Granada has many gates, one of which being the Gate of Elvira. This is a large gate that today stands between the old parts of the city and the new parts. Another place to visit is the Cathedral of Granada. Though the area surrounding it is quite touristy, it’s also beautiful and gives off a medieval town feel since the streets are so narrow. The souvenirs here consist of pottery and nuts, so it’s also fun to window shop and see all the ceramics and housewares, and try a few snacks.

When you pass to the other side of Calle Gran Via de Colon, the feel becomes much more modern and this area is more prone to restaurants. This is where you can go up to Albaicin, the old part of town that you can see in many views from the palace. It is a residential area so much slower. However, if you go to the Mezquita Mayor de Granada or the Mirador San Nicolas, you can get fantastic hillside views of the Alhambra. It’s a quiet but nice walk up, and for a fit person may take about half an hour. 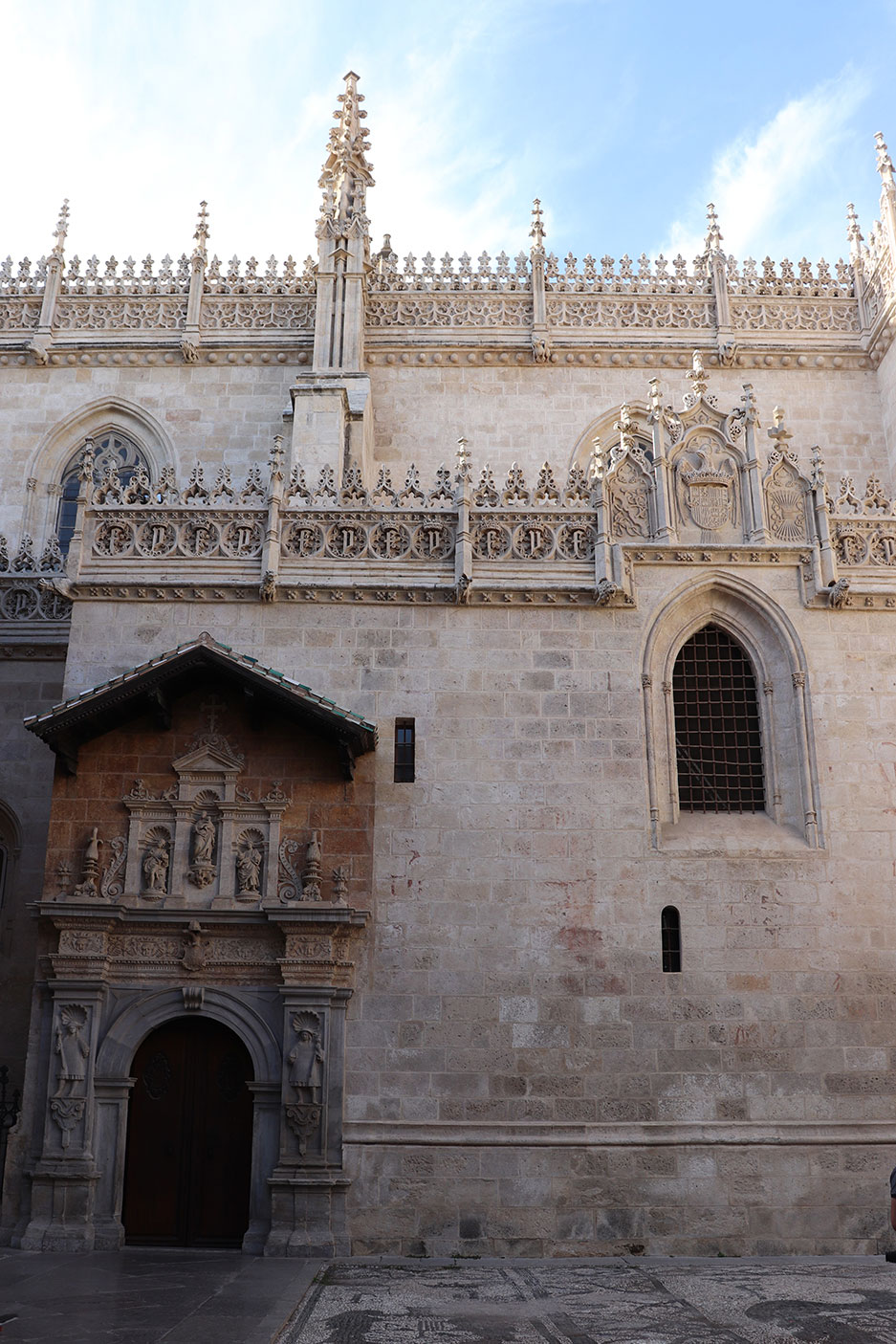 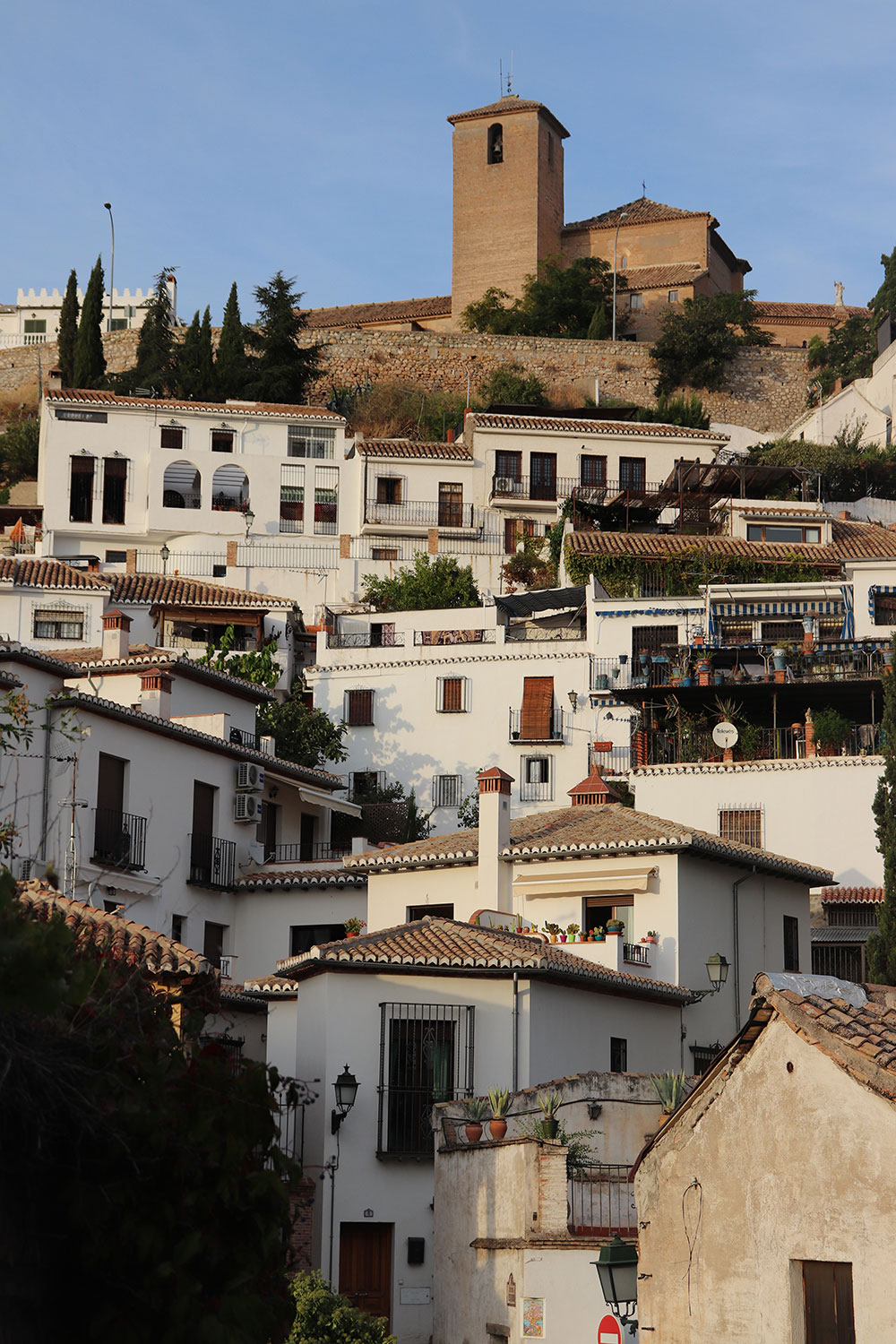 There’s also a handful of small house and art museums to visit around Granada. I wanted to visit Carmen de los Martires but it was closed when I went by. However, the Alhambra was so magnificent that it sucked up a lot of my energy for appreciating interiors that day. I needed some time to process the beauty I’d just beheld before moving onto another architectural highlight. I almost did a Hammam (Turkish bath), which would’ve been a great way to relax and rest my sore body. I did one in Seville (blog post coming soon) and recommend it.

I really enjoyed the Alhambra and haven’t geeked out over a place as hard in a long time. Architecture and history isn’t everyone’s cup of tea, but I feel like even the nonchalant would enjoy this splendor. If you couldn’t tell by now, yes, I do highly recommend visiting! 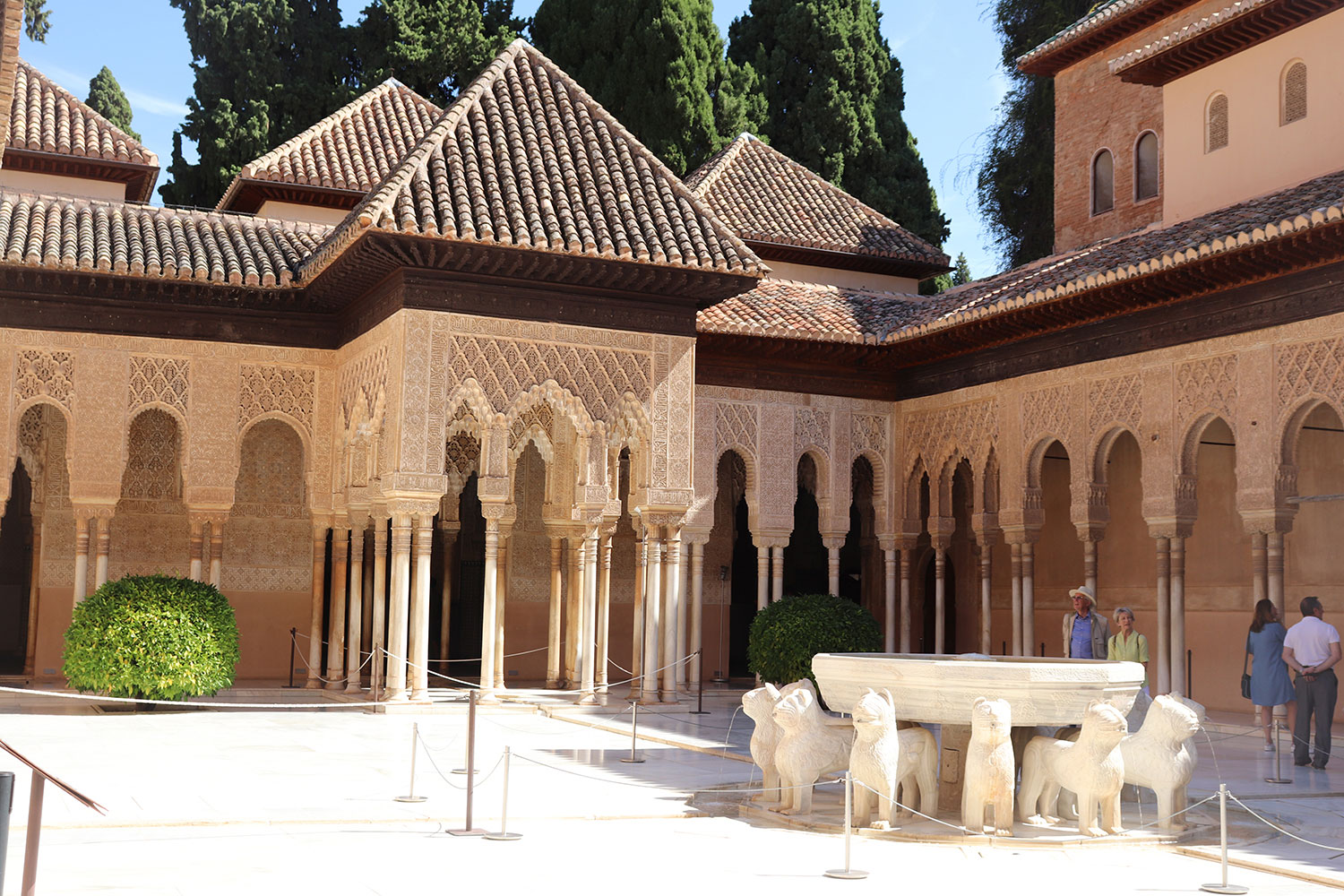 Have you ever been to the Alhambra? What did you think? 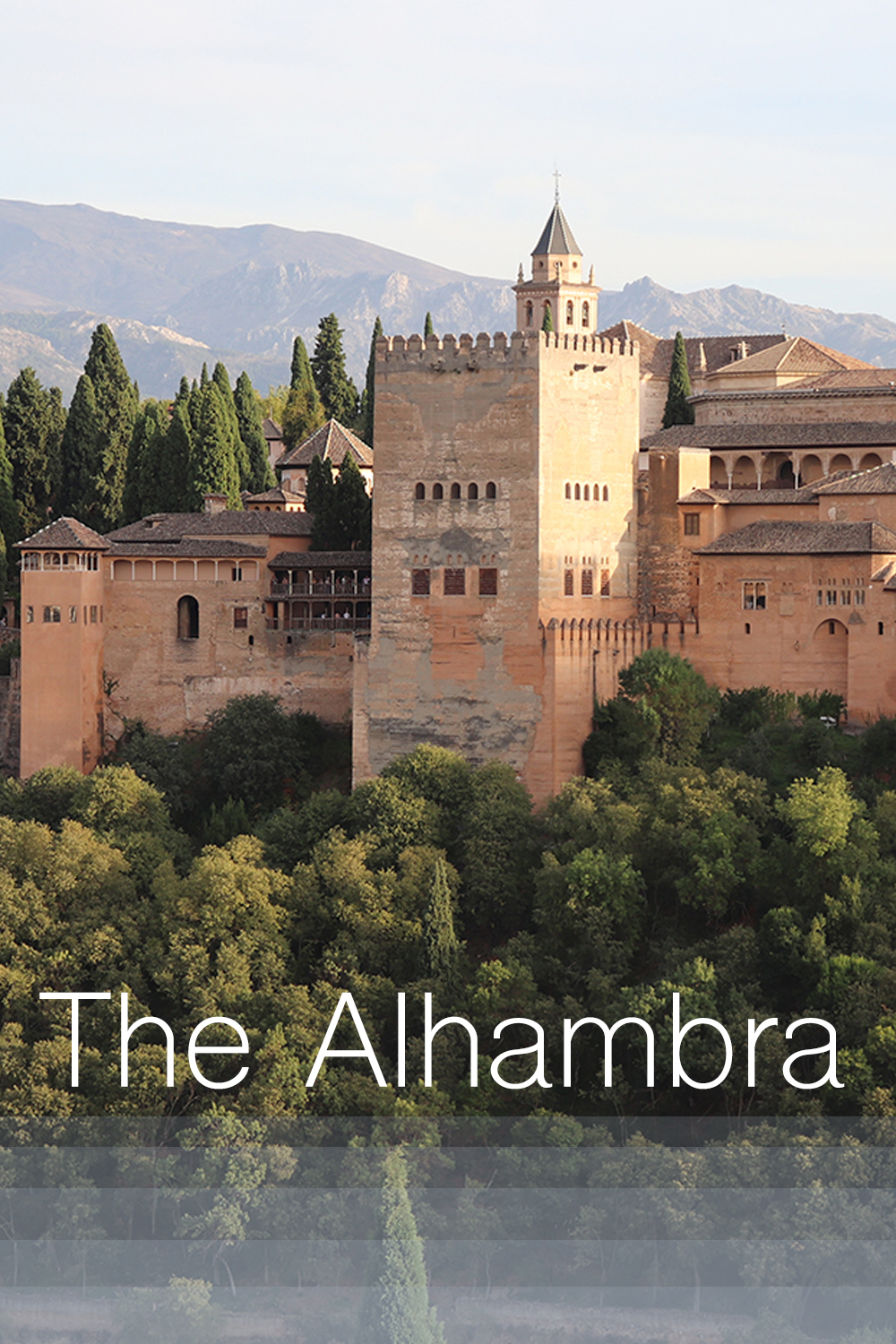 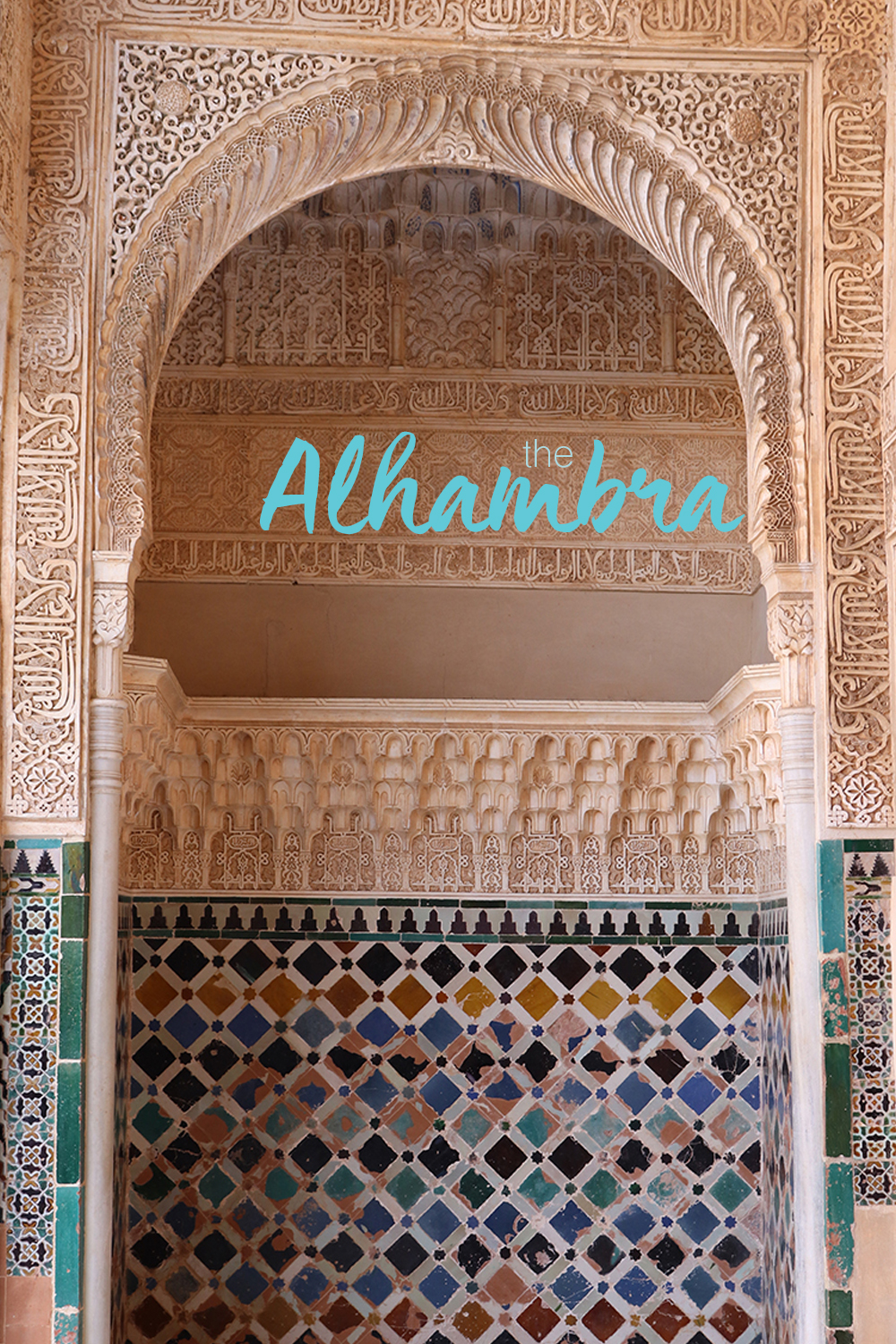